Paul served for 23 years in the RAF, mainly in the Bomb Disposal Unit, but his job exposed him to prolonged danger and repeated traumatic events, and his mental health suffered as a result. During Paul’s first tour abroad, he started to experience panic attacks and he was sent back to the UK with suspected Acute Stress Reaction. As a committed team member, he felt guilty and ashamed that he had left his colleagues and he asked to be sent back to Iraq to re-join his unit. The second and third tours followed and Paul was exposed to further trauma and started to suffer from anxiety and depression and to experience intense and disturbing flashbacks. To try to hide the symptoms of PTSD and to manage his mental health, Paul self-medicated with increased amounts of alcohol. Paul attempted to improve his well-being and he left his career in Bomb Disposal but his mental health continued to decline until sadly, he attempted suicide. His wife, who also served in the RAF, insisted that he sought medical help. For the next 4 years, Paul received outstanding therapy and support from the DCMH (Department of Community Mental Health). Afterward, Paul gave himself plenty of time to regroup and to consider what he wanted to do next. 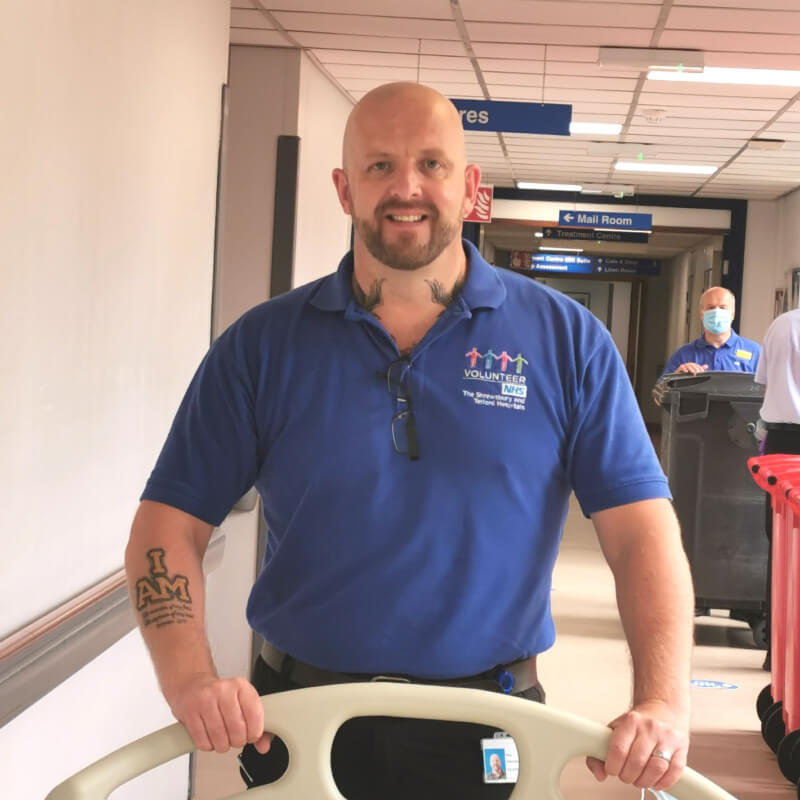 It was at the start of the pandemic and he knew that he wanted to help during a difficult time for the NHS - he decided that a hospital porter role would be ideal. However, he needed support and reassurance and so he decided to contact WWTW and was put in touch with Chris Carlisle, an Employment Advisor. Chris quickly recognised that Paul wasn’t ready to return to full-time work and together they decided that a part-time volunteer role would be the best initial course of action. Chris provided Paul with all the information and guidance that he needed to apply to be a volunteer for the NHS. In March 2020, Paul started as a hospital porter and volunteered for 3-8 hrs shifts a week. The work helped to restore his self-esteem and reminded him that teamwork was incredibly important to him.

Paul now works alongside 6 other veterans and he has been asked to be an Armed Forces Champion.

"Walking With The Wounded made me feel valuable as a veteran when I felt discarded by the military so now, I can move forward and remember my service time fondly. I love every single day that I go into work. Happiness is so much more important than money. If I can make a patient smile, then I have achieved my goal.”